Analysis of flame retardants and other persistent chemicals in blood samples for studies of ethnically diverse, low-income pregnant women 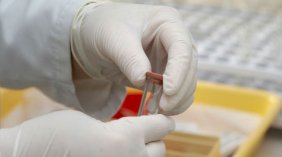 The University of California San Francisco (UCSF) Studies of Second-Trimester Pregnant Women collected samples from 25 pregnant women seeking care at San Francisco General Hospital in 2008-09 and 36 pregnant women in 2011-12.  The study population consisted of ethnically diverse and predominantly low-income women in their second trimesters of pregnancy. These studies were a collaboration between Biomonitoring California laboratories and the UCSF Program on Reproductive Health and the Environment (PRHE).  The Program laboratories analyzed blood samples for persistent organic pollutants (polychlorinated biphenyls [PCBs], organochlorine pesticides, and polybrominated diphenyl ethers [PBDEs]), their metabolites (hydroxy-PCBs and hydroxy-PBDEs), and perfluorochemicals (PFCs).

The first UCSF study of 25 women, sampled in 2008-09, found the highest PBDE levels ever reported among pregnant women world-wide.[1] The second UCSF study of 36 women, sampled three years later, showed a 39% decrease in PBDE levels, while the levels of hydroxy-metabolites of PBDEs decreased even more (by 86%).[2] [3]  In contrast, levels of legacy chemicals such as PCBs and hydroxy-metabolites of PCBs declined only slightly over the same time period.

Although PBDE levels appear to be dropping, Californians still have the highest measured levels in the world because of extensive past use of these flame retardant chemicals in consumer products.  California was the first state in the nation to legislate a ban on the commercial mixtures pentaBDE and octaBDE (AB 302 and later AB 2587; Health & Safety Code Section 108921 et seq.).  U.S. production of these two mixtures ended in 2006, and the last major PBDE mixture (decaBDE) was due to be phased out by the end of 2013.  Because of the PBDE bans and phase-outs, a further decline in PBDE levels is expected.  However, PBDEs are persistent in the environment and have entered the food supply, so some exposure will continue.

Is this information helpful?