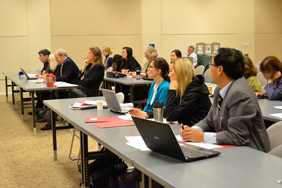 The Scientific Guidance Panel, a panel of expert scientists from outside of state government, plays a major role in the California Environmental Contaminant Biomonitoring Program (also known as Biomonitoring California).

Role of the Panel

The role of the Panel is to:

The Panel has a total of 9 members.  Appointment to the Panel is by the Governor (5 members) and the California Legislature (Speaker of the Assembly, 2 members; Senate Rules Committee, 2 members).

As required by SB 1379, persons appointed to the Scientific Guidance Panel must have expertise in one or more of the following areas: Public health, epidemiology, biostatistics, environmental medicine, risk analysis, exposure assessment, developmental biology, laboratory science, bioethics, maternal and child health (specialty in breastfeeding), and toxicology.

They oversee and make recommendations on how the program is developed and carried out.

Panel meetings are open to the public.

Carl F. Cranor, Ph.D., M.S.L.
Dr. Carl Cranor is a Distinguished Professor of Philosophy and member of the faculty of the Environmental Toxicology Graduate Program at the University of California, Riverside. For 25 years his research has focused on philosophic issues concerning risks, science and the law. He is the author of Regulating Toxic Substances: A Philosophy of Science and the Law (Oxford, 1993), Toxic Torts: Science, Law and the Possibility of Justice (Cambridge, 2006), and Legally Poisoned: How the Law Puts Us at Risk from Toxicants (Harvard, 2011), as well as co-author of Identifying and Regulating Carcinogens (U.S. Congress, Office of Technology Assessment, 1987), and Valuing Health: Cost Effectiveness Analysis for Regulation (Institute of Medicine, 2006). His research has been supported by about $1 million in grants from the National Science Foundation, the University of California Toxic Substances Research and Teaching Program, and other agencies. He has served on California science advisory panels (Proposition 65 Scientific Advisory Panel, Electric and Magnetic Fields Panel, and Nanotechnology Panel) as well as on Institute of Medicine and National Academy of Sciences Committees. He is an elected fellow of the American Association for the Advancement of Science and the Collegium Ramazzini.

Oliver Fiehn, Ph.D.
Dr. Oliver Fiehn is Full Professor of Molecular and Cellular Biology at the University of California, Davis. He is Director of the West Coast Metabolomics Center of the National Institutes of Health, which is housed in the UC Davis Genome Center. He has pioneered developments and applications in comprehensive analysis of metabolism with over 110 publications to date, starting from 2000 onwards as group leader at the Max-Planck Institute in Potsdam, Germany. He is currently overseeing two laboratories with more than 25 staff members and 15 mass spectrometers. He is integrating new approaches and technologies to perform pathway-based mapping of metabolic regulation in response to genetic or environmental perturbations. He is performing active research in cancer metabolism, mitochondrial toxicity, metabolic diseases, databases and drug-response phenotyping. In his function on the board of directors of the Metabolomics Society, he has chaired efforts to establish metabolomic databases and libraries, to standardize metabolomic reports and has organized a range of workshops and conferences.

Eunha Hoh, Ph.D., M.S.E.S.
Dr. Eunha Hoh is a Professor of Environmental Health in the School of Public Health at San Diego State University. Her primary research focus is the investigation of diverse environmental pollutants and their impact on human health and ocean health. Chemicals of interest include persistent organic pollutants, such as brominated and chlorinated flame retardants and their degradation products; polycyclic aromatic hydrocarbons (PAHs); and tobacco smoke residues (third-hand smoke components). Dr. Hoh also investigates emerging chemicals of concern, and developed a non-targeted analytical approach with novel instrumentation for detection of a broad range of organic chemicals in various types of environmental matrices. Using this approach, she discovered and identified previously unknown contaminants and conducted comprehensive organic contaminant assessments. She is working on further development of the non-targeted analytical approach for a broad range of applications, including environmental monitoring, exposure assessment, indoor pollution, and evaluating wastewater treatments. Dr. Hoh holds a Ph.D. in Environmental Science from Indiana University.

Ulrike Luderer, M.D., Ph.D., M.P.H.
Dr. Ulrike Luderer is Professor of Medicine in the Division of Occupational and Environmental Medicine in the Department of Medicine at the University of California at Irvine. She also holds secondary appointments in the Department of Developmental and Cell Biology and the Program in Public Health, and is the Director of the Environmental Toxicology Graduate Program. Dr. Luderer's research focuses on mechanisms of action of reproductive toxicants and on the roles of antioxidants and oxidative stress in reproductive toxicity and reproductive aging. She has served on several expert panels of the National Toxicology Program's Center for the Evaluation of Risks to Human Reproduction (now called the Office of Health Assessment and Translation), was a member of National Research Council and World Health Organization advisory committees, and has served on the U.S. EPA Science Advisory Board Environmental Health Committee.

Thomas McKone, Ph.D.
Dr. Thomas E. McKone is Professor Emeritus in the School of Public Health at the University of California, Berkeley and a Retired Affiliate at the Lawrence Berkeley National Laboratory (LBNL). Over his career, McKone’s research has focused on the development, use, and evaluation of models and data for human health and ecological risk assessments, and the health and environmental impacts of energy, industrial, and agricultural systems. In his post-retirement positions with the University of California, he is continuing research on exposure science, life-cycle impact assessment, and the health impacts of fossil fuel combustion. He has served six years on the EPA Science Advisory Board, has been a member of more than a dozen National Academy of Sciences (NAS) committees, and has been on consultant committees for the Organization for Economic Cooperation and Development (OECD), the World Health Organization, the International Atomic Energy Agency, and the Food and Agriculture Organization.

Penelope (Jenny) Quintana, Ph.D., M.P.H.
Dr. Penelope (Jenny) Quintana is Professor of Public Health at San Diego State University Graduate School of Public Health. She has an M.P.H. from San Diego State University and a Ph.D. in Environmental Health Sciences from UC Berkeley. She has a research focus on exposures to children and vulnerable populations at the US-Mexico border. She has assessed children’s exposure to toxicants in house dust and on surfaces, for example residual tobacco toxicants remaining after smoking has taken place, known as third-hand smoke.  In conjunction with researchers at Universidad Autónoma de Baja California, Tijuana, she has studied markers of DNA damage in placentas from a Tijuana hospital, and exposure to toxic traffic pollutants inside vehicles waiting in lines to cross the US-Mexico border. With the University of Washington, she has measured absorption of diesel pollutants through urinary analysis in pedestrians waiting in long lines northbound at the San Ysidro Port of Entry next to idling diesel buses. She is the author of a 2013 report drawing attention to the long northbound wait times and lines of idling vehicles at US-Mexico Ports of Entry as an environmental justice issue for border crossers and surrounding communities.

Megan R. Schwarzman, M.D., M.P.H.
Dr. Megan Schwarzman is a Research Scientist at UC Berkeley’s Center for Occupational and Environmental Health (COEH). She also serves as Associate Director of Health and Environment for the interdisciplinary Berkeley Center for Green Chemistry, which she co-founded in 2009. Her work focuses on endocrine disrupting substances, reproductive environmental health, U.S. and European chemicals policy, and how to use environmental health knowledge to design safety and sustainability into the chemical building blocks of materials. Dr. Schwarzman earned her medical degree from the University of Massachusetts, completed her specialty training in Family Medicine at the University of California, San Francisco, and earned a Masters of Public Health from the University of California, Berkeley. She also serves on the Department of Toxic Substance Control’s Green Ribbon Science Panel.  In addition to her work at UC Berkeley, Dr. Schwarzman practices medicine part time at San Francisco General Hospital.

Veena Singla, Ph.D.
Dr. Veena Singla is Senior Scientist in the Healthy People and Thriving Communities Program at the Natural Resources Defense Council (NRDC). She applies the most current scientific principles and data to inform policies aimed at reducing and preventing harmful environmental chemical exposures. Dr. Singla’s research focuses on understanding how toxic chemicals threaten the health of vulnerable populations, including pregnant women, children, and workers, through an interdisciplinary approach incorporating environmental health, exposure science, public health, and policy expertise. She specializes in the communication of complex scientific information at the intersection of research and policy, and has led work on groundbreaking policies to evaluate safer chemicals and promote substitution of harmful chemicals in consumer products. Prior to joining NRDC, she worked as a postdoctoral teaching fellow at Stanford University, an adjunct faculty member at the University of San Francisco, and at the Program on Reproductive Health and the Environment at the University of California, San Francisco. She holds a Ph.D. in cell biology from the University of California, San Francisco.

José R. Suárez, M.D., Ph.D., M.P.H.
Dr. José R. Suárez is an Assistant Professor in the Department of Family Medicine and Public Health at the University of California, San Diego. His research focuses on understanding the role of environmental contaminants on brain development and metabolic alterations of children and adults. He has conducted several studies of agricultural populations. He is the principal investigator of a longitudinal study (“ESPINA”) aimed at understanding associations between low-level exposures to pesticides and short- and long-term alterations in the development of children living in the agricultural county of Pedro Moncayo, Ecuador. He is involved in community-based participatory processes in Ecuador in which he and his group of collaborators are collecting community health surveys and mental health screenings of large rural populations.  Dr. Suarez is also the principal investigator of a research trial that is testing the effect of dietary interventions on enhancing the excretion of persistent organic pollutants, such as PCBs, PBDE flame retardants and organochlorine pesticides among older adults in San Diego. Additionally, he is examining potential relationships between exposures to persistent organic pollutants (organochlorine pesticides, PCBs, PBDEs, and PBBs) and markers of oxidative stress, alterations in glucose and lipid metabolism, and subclinical heart disease in middle-aged adults (“CARDIA” study). Dr. Suárez earned his M.D. from Universidad San Francisco de Quito in Ecuador and his Ph.D. and M.P.H. from the University of Minnesota.